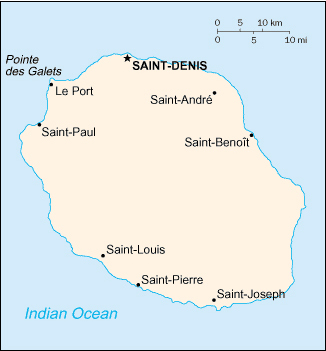 Background: Réunion previously Île Bourbon) is an island in the Indian Ocean that is an overseas department and region of France. It is located approximately 550 km (340 mi) east of the island of Madagascar and 175 km (109 mi) southwest of the island of Mauritius. As of January 2021, it had a population of 858,450.[1]

Like the other four overseas departments, Réunion also holds the status of a region of France, and is an integral part of the French Republic. Réunion is an outermost region of the European Union and is part of the eurozone.[3] Réunion and the fellow French overseas department of Mayotte are the only eurozone regions located in the Southern Hemisphere.
Lo Mavéli or Lö Mahavéli, the unofficial flag of Réunion from 2003 used officially by various local authorities, like Saint-Denis and Saint-Philippe.

As in the rest of France, the official language of Réunion is French. In addition, a majority of the region’s population speaks Réunion Creole.

The island is a French possession, and therefore uses the flag of France.

Government Type: Réunion is an oversees department of France. The nation sends seven deputies to the French National Assembly and three senators to the Senate.