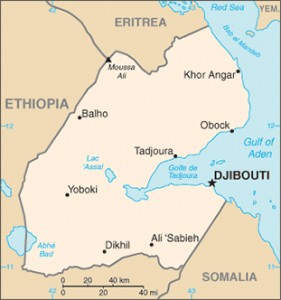 Background: The region of present-day Djibouti was the site of the medieval Ifat and Adal Sultanates. In the late 19th century, treaties signed by the ruling Somali and Afar sultans with the French allowed the latter to establish the colony of French Somaliland. The designation continued in use until 1967, when the name was changed to the French Territory of the Afars and the Issas. Upon independence in 1977, the country was named after its capital city of Djibouti. Hassan Gouled APTIDON installed an authoritarian one-party state and proceeded to serve as president until 1999. Unrest among the Afar minority during the 1990s led to a civil war that ended in 2001 with a peace accord between Afar rebels and the Somali Issa-dominated government. In 1999, Djibouti’s first multiparty presidential election resulted in the election of Ismail Omar GUELLEH as president; he was reelected to a second term in 2005 and extended his tenure in office via a constitutional amendment, which allowed him to serve a third term in 2011 and begin a fourth term in 2016. Djibouti occupies a strategic geographic location at the intersection of the Red Sea and the Gulf of Aden. Its ports handle 95% of Ethiopia’s trade. Djibouti’s ports also service transshipments between Europe, the Middle East, and Asia. The government holds longstanding ties to France, which maintains a military presence in the country, as does the US, Japan, Italy, Germany, Spain, and China.