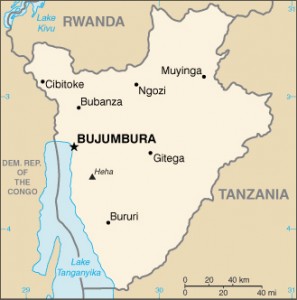 Background: Burundi is a small country in Central-East Africa bordered by Tanzania, Rwanda, the Democratic Republic of Congo, and Lake Tanganyika. Created in the 17th century, a Burundi Kingdom was preserved under German colonial rule in the late 19th and early 20th century, and then by Belgium after World War I. Burundi gained its independence from Belgium in 1962 as the Kingdom of Burundi, but the monarchy was overthrown in 1966 and a republic established. Political violence and non-democratic transfers of power have marked much of its history; Burundi’s first democratically elected president, a Hutu, was assassinated in October 1993 after only 100 days in office. The internationally brokered Arusha Agreement, signed in 2000, and subsequent ceasefire agreements with armed movements ended the 1993-2005 civil war. Burundi’s second democratic elections were held in 2005. Pierre NKURUNZIZA was elected president in 2005 and 2010, and again in a controversial election in 2015. Burundi continues to face many economic and political challenges.