ISELLE TO GIVE HAWAII FIRST HURRICANE IN 22 YEARS
HONOLULU (AP) – Iselle was supposed to weaken as it slowly trudged west across the Pacific. It didn’t – and now Hawaii is poised to take its first direct hurricane hit in 22 years. Tracking close behind it was Hurricane Julio, which strengthened early Thursday into a Category 2 storm. 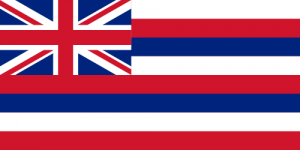 Motto: Ua mau ke ea o ka aina I ka pono
(The life of the land is perpetuated in righteousness.)

State Information: Known as the “Aloha State” (in Hawaiian, “aloha” can mean “hello”), Hawaii is a group of volcanic islands in the central Pacific Ocean that together became the 50th state in 1959. The state’s name is possibly derived from a native Hawaiian word for homeland, hawaiki or owhyhee. Today, Hawaii, whose capital is Honolulu, is often called the “Crossroads of the Pacific” and is a popular vacation spot. The colorful hibiscus is the state flower.